When night shift starts and you hear plenty sirens roaring, you know it will be hard. That night it was rather weird, like a movie by Tarantino. When I entered a ward, it was full of firemen and police officers. It was easy to find out, what has happened. An intoxicated man locked himself in cleaning room. He was not in life danger and officers should soon break-open the door. So far, so good.
The man was well known to us. A usual middle aged man, who started bodybuilding during covid lockdown. Soon after his friend started to sell him “bodybuilding pills”. With increasing doses, he started to be aggressive and hallucinating within weeks. Two weeks ago, the patient had to be transported by police to our emergency department, where the pills were identified as methamphetamine. The man was really aware of challenge he was facing and he tried to abstain, but addiction finally overcame him.
That night the man was transported to our department with police escort for hallucinations, paranoid delusions, sympathomimetic toxidrome and intermittent aggressiveness. Police left soon after and personnel was on their own. Initially the man was cooperating, but soon he started hallucinating again and he suddenly stormed nurses. It was easy for him to overcome gentle ladies. Fortunately, he didn´t injure anyone – he was just running for his life and he locked himself in closest room.
Police returned back in minutes, together with fire brigade. They opened the door, but no one was inside. Only hole in dropped ceiling made a hint what has happened. The police officers and firemen rushed into the pent space. They were many, they should catch him soon, shouldn’t they?
Not at all. The intoxicated man was strong, nimble and free of pain. Contrary, officers in bulky uniforms were getting stuck by every screw or pipe. Soon they realized that they cannot vanquish him. Instead they drove him in a strait place between pipes, where no one could get in or out. The plan was simple – we will wait until the methamphetamine vanishes and then it should be easy to get the man out. However, things got more complicated. Every time the man started hallucinating, he also started damaging the nearby pipes. Technicians told us that some of them is oxygen transporting pipeline, possibly supplying two intensive care units with 24 oxygen dependent covid patients. That made the situation critical. Police tried to taser the patient. It was not a good idea. Not only it enraged the patient, the risk of fire was also high, if the pipeline was damaged. So I decided we have to sedate the patient.
However, this was not easy. I had to crawl through hole in dropped ceiling to patient’s hideout, overwhelm him, catch his limb and administer medication. Intramuscular application was the only possible way of application. After several minutes of skirmish, I was able to give him 2mg of clonazepam and 5 mg of haloperidol. I was afraid that high dose could lead to fatal respiratory depression while in case of low dose further application would be extremely difficult, as the patient started to be more agitated and aware of our intentions. Short after application, he mentioned that he likes one beautiful police woman present in the room. I asked her to speak with him and she was able to calm him down. After about 10 minutes drugs started to work, so firemen were able to make a hole in the ceiling and extricate the patient from his hideout. His body was full of scratches but luckily he was not seriously wounded. He wake up next day with complete amnesia of past events. Contrary, no one else will forget this night to the end of his life. 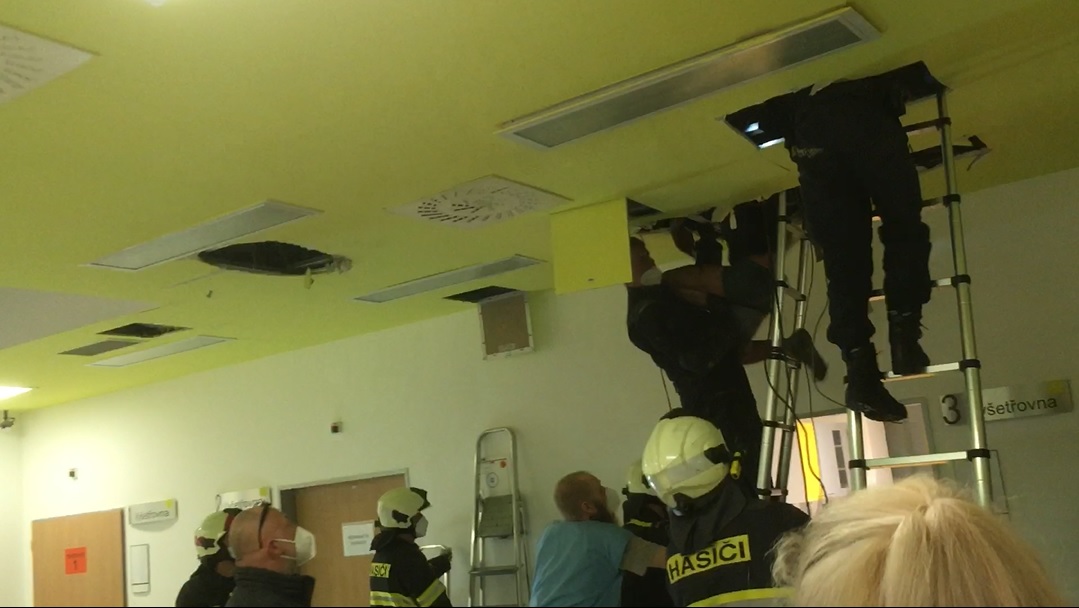